The summer of 2011 took Brothers Enroute out of their home state to Wyoming and the Wind River Mountain Range. The plan was to tackle the enormous area of the Little Wind River drainage system below Roberts Mountain and just North of the Great Continental Divide. We accessed this area leaving our trucks at Washakie Park which is accessible out of Lander Wyoming. Our lengthy drive from our homes experienced a few minor setbacks. These included issues with MSRH’s truck, a traffic jam in the middle of nowhere due to a car fire, and a stop at Home Depot for parts to repair MSRH’s truck (Yes, Home Depot). The initial plan was to obtain fishing/trespass permits in Lander upon arrival that first day, but the setbacks put us in town after the stores selling the licenses had closed. Consequently, the first night was passed in Lander instead of at the trailhead in Washakie Park. The local tribe allowed us to stay on their Pow-Wow ground which was a very generous gesture to extend to “trespassers”.

The next morning we awoke early enough to assure the obtaining of licenses as soon as the store opened. It took nearly 1 hour to fill out the necessary information. They were also quite pricey at $70 apiece. Thumper and Pop-Pop were unable to attend this adventure, but a father and son duo joined us in their place (Mr. Botany and Alces). Also, along for this journey was the four-legged fishing friend of Alces (Scuba). We joked as we started that if not for anything else, Scuba would at least assuage the appetite of a bear long enough for us to clear the area. Besides one scare with some type of biting insect, Scuba was a joy to have along.

We began the journey from Washakie Park around 11 am and quickly realized “We’re not in Utah anymore”. Setbacks became a theme for the first part of the trip as within 4 hours of starting the hike we found ourselves already 2 miles off course, and nearly 2,000 feet above where we intended. The amazing size of the Wind River Range rattled us, and the disappearance of a well-groomed trail just before a fork in the path caused us to take a 4 hour detour up the side of a mountain with 50 pound packs. We kept commenting amongst ourselves that it was very strange to be climbing as much as we were. A scenic view atop a ridge apprised us of our error, and we made the corrective actions to get back on route. Blazes, cairns, GPS units, and maps were more closely followed from then on.

Vast overview of how wrong of a turn was made. Lower Twin Lake (the destination) can be seen 2 miles off the taken trajectory.

As seems to be a theme of most trips, we ended up behind schedule and set up camp for the first night at Lower Twin Lake. This was somewhat of a serendipitous occasion though because the Twin Lakes afforded a pleasant evening with a nice campsite and pan sized fish at seemingly regular intervals while fishing. Another beneficial feature of the used campsite was the large granite shelf to one side of Lower Twin Lake. This made tent and bag packing the next morning very quick and without the usual need for brushing off pine needles and dirt.

That second morning we started on the trail relatively early as we wanted to arrive at the clusters of larger lakes higher in the drainage system. No time was spent fishing at Raft Lake, but a break was taken overlooking it. This was the point when the group fully realized the distance and relative size of the area to be explored. Upon continuing we found the trail fairly technical and with the altitude it quickly drained the collective energy of the group. A few river crossings slowed things down a bit as well, but the group was prepared with water ready shoes, or some just went barefoot. The frigid water was a stark and welcome contrast to the high temperatures inside the hiking boots of the moment and a few extra minutes were used to bask and bathe. By mid-afternoon, camp was once again ready to be set up and a concealed place near the shore of the upper no name lake was selected. Fishing at the inlet to the lower no name lake was profitable and the group soon had enough fish for the evening meal. 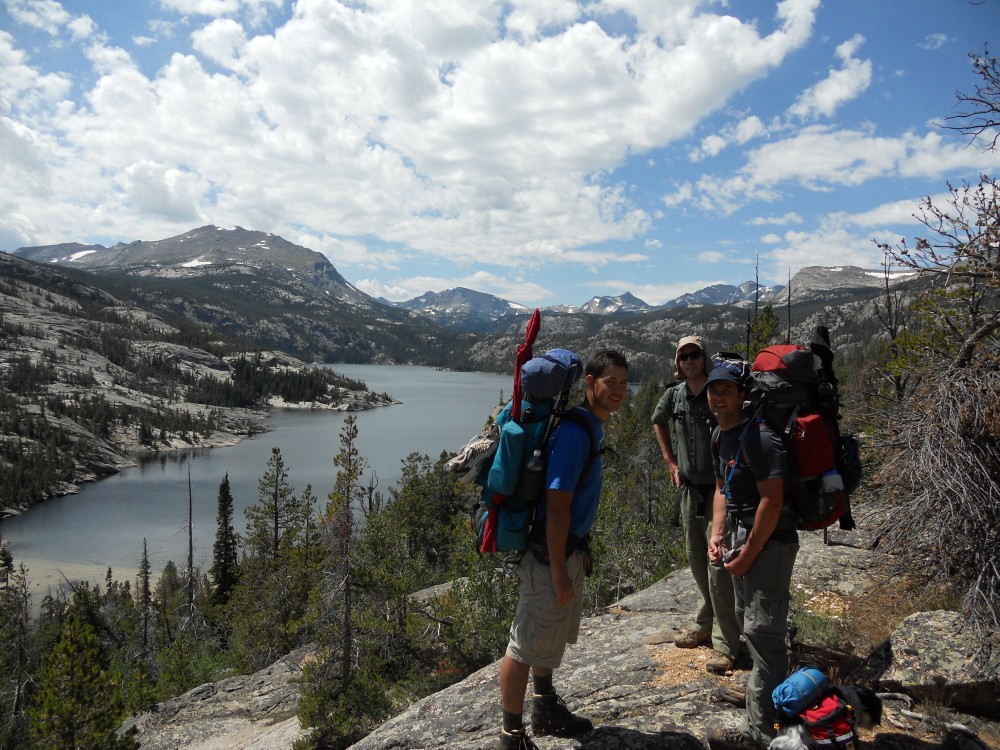 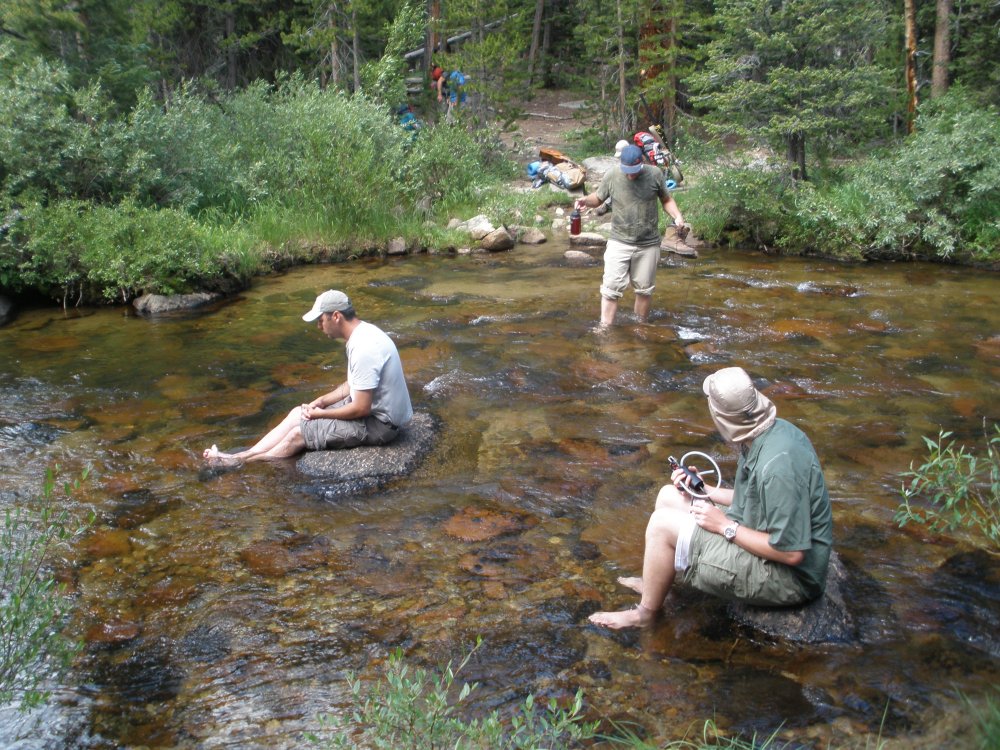 The Professor, Alces, and Photoman Cooling Hot Tired feet at a river crossing. 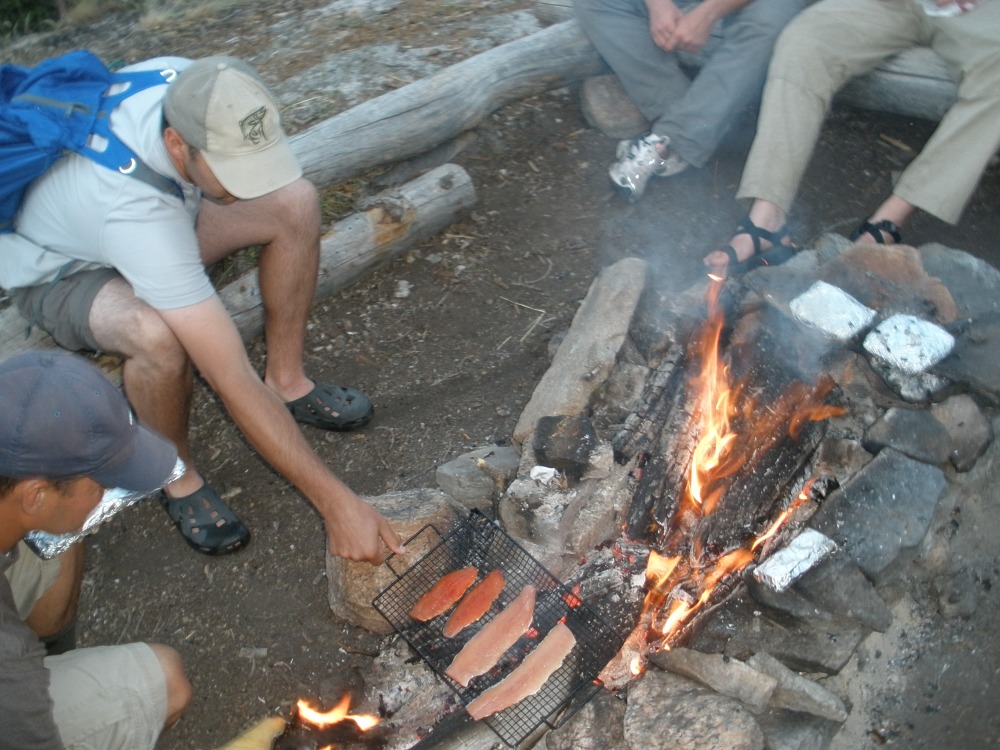 Trout supper made to order.

Later that evening the guitars were unpacked and another session of requests and “If you play it in E I can play the harmonica part”, ensued. Unsurprisingly these sessions end up being some of the most fun the group has during the annual trip. It also lends to some of the more picturesque human moments for the group. Thumper being absent this trip placed a damper on any real talented percussion for the session, but lack of talent doesn’t usually stop Brothers Enroute.

The Professor, Alces, MSRH, Myself, Mr. Soccer, and Photoman all enjoying White Man Fire while singing “Light My Fire”.

The next day was not to be a long hike with full packs as we changed our original plans and our next campsite was moved to a nearer lake. Upon arrival at this lake (Wykee Lake) we set up camp for a couple of nights and got down to the business of catching fish. An awesome omen was that MSRH hooked a monster fish that might still be swimming with his lure and an unraveled spool of line. I had never seen a pole act like that on a mountain fish. He assured us that his drag was tight too. We caught quite a few large fish in this lake and the fishing was a blast. Healthy, but hungry lake trout that knew how to fight were the most common caught. Gold and copper lures seemed to be most effective. I had never experienced such fast fishing with such large fish. It truly was laughingly fun. The remainder of that day was mostly spent catching fish that we had heard existed in the Wind River Range. A fish every other cast was common for approximately ten fish per hole. Then you would have to move on to the next hole. Signs of bear were also noticed at this lake and more caution with food storage was practiced for the night.

Mr. Soccer with one of many large Lake Trouts caught at Wykee Lake.

The next day the group donned day packs and ventured up the drainage to Lake Polaris. The stream/river between Lake Polaris and Wykee Lake was very entertaining to fish as fingerlings would grab almost whatever fly we threw at them. It has always been an interest of the group to be able to catch any type and size of fish according to what is available. Lake Polaris was fished until enough food had been caught for lunch. This area lacked little for breathtaking scenery and the grandiose nature only caused ones self-worth to retrospectively diminish as more was seen. After lunch the group split to again meet up at Lake Solitude. A really picturesque waterfall was used with our filters to fill the water-packs. Lake Solitude was also fun fishing but not as fast or as with as big of fish as Wykee. The scenery was absolutely breath-taking. After the group reformed, we continued on to see if other lakes could produce fishing fun. Upper and Lower Ice Lakes were both fished, but Upper didn’t seem to have any fish in it at all. Lower Ice Lake was stingy fishing, and not much success was had. I had to put a lure in Darren Lake to see if a Golden Trout might be found, but after a few casts without success and the threat of a setting sun, the attempt for a Golden was given up. As mentioned, the sun was setting and the large distance back to camp needed to be covered before nightfall. Bear signs were plentiful, and the childhood chant of “no bears are out tonight” didn’t really help calm imaginations. 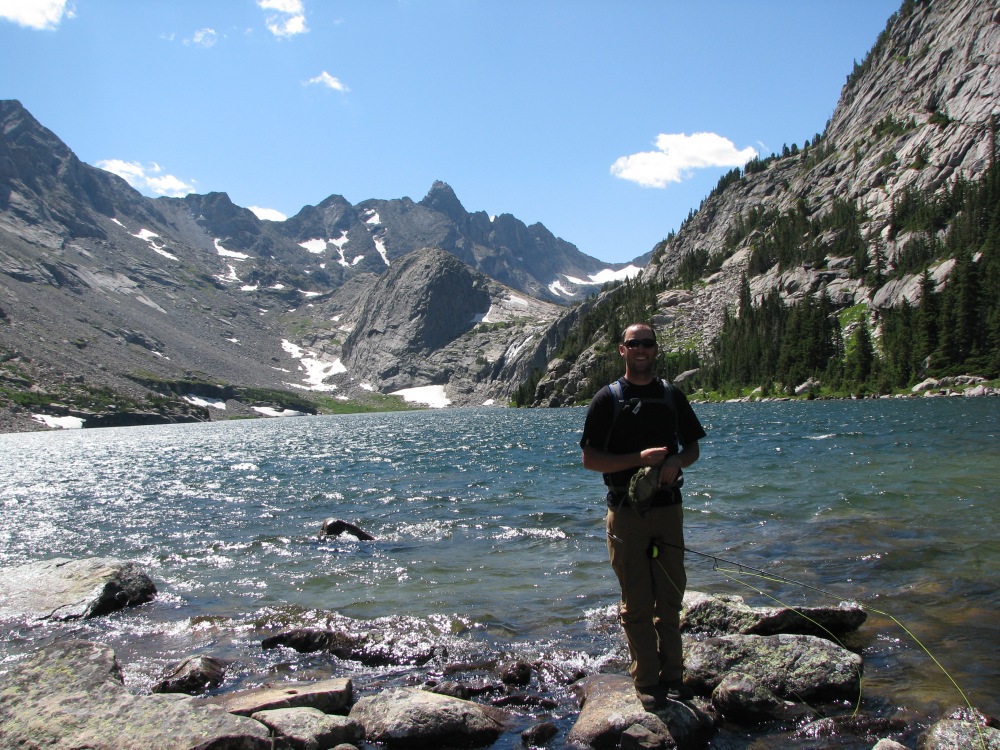 The Professor attempting fly-fishing on a windy day at Lake Polaris.

Mr. Soccer, MSRH, and I filtering water and enjoying the scenery. 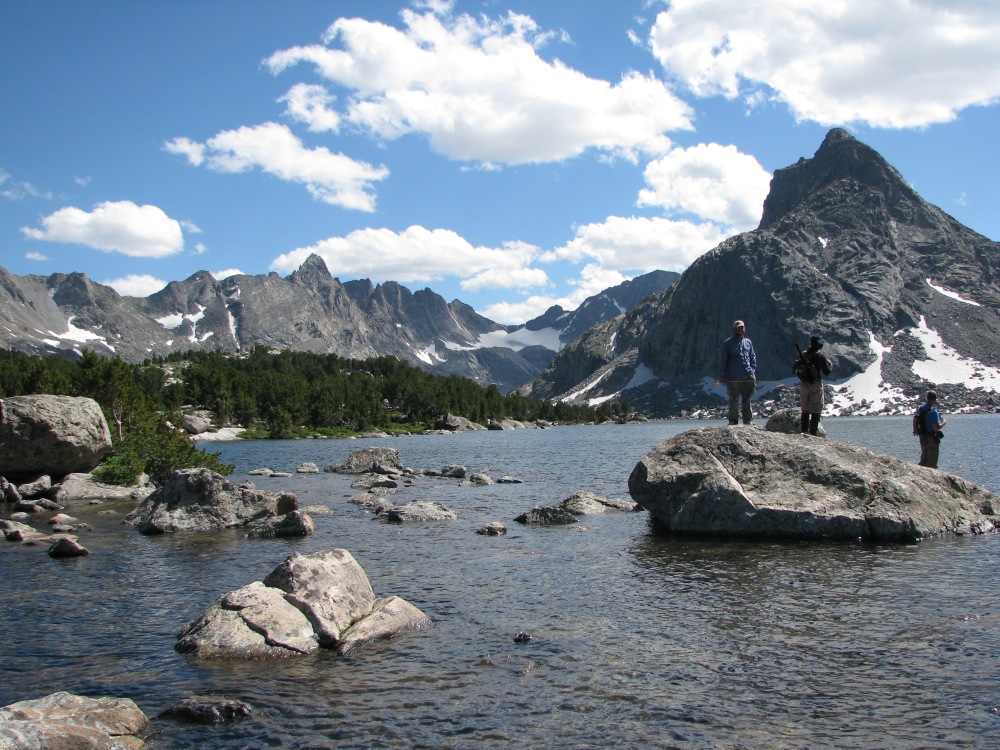 Mr. Soccer, MSRH, and I boulder fishing at the outlet of Lake Solitude.

Ice Lake seemed to be a fitting name for this “glacier” fed body of water.

The next morning we packed camp again to start the trek back out of the drainage system. By this time our packs were lighter from food consumption, but no relief was really felt after a few miles. The goal of the group that day was the sandy beach at Raft Lake. This was accomplished and tents were set up right on the beach in an alcove of a rock outcropping. Lake bathing, a little fishing, and much relaxing was done. The next day’s hike out to the truck was to be a long one. During preparations for the nightly fire The Professor and Alces went to the outlet of Raft Lake and fly fished for a while. As is the annoying capability of The Professor, he ended up catching the biggest fish of the trip on a fly rod on the last night. It was large enough to provide meat for whoever wanted it.  It fought for approximately a half hour.   The campfire that night was indeed memorable because of the location, good food, and good music.

The next morning involved packing up and starting the long hike back out to the trailhead. The correct route out that was missed coming in was taken on the way back out. One interesting thing of note was the decreased flow and levels of the streams on the way back out. Most of the runoff had now melted and made its way down the drainage, so the difference in levels was quite noticeable. The correct path out was somewhat sadistic in its path. Instead of maintaining the same level on a hillside, it would dive down into a valley, and then come straight back up to the same level. The previous thought of “easy” six miles out evaporated with the sweat in the warming cool mountain air. However, by mid-day everybody was back at the trucks and ready to start the long drive home. Without any time to really ferment the greatness of this trip, Brothers Enroute already knew this trip would be the gold standard.

I am waiting for the fire to start itself while eating Swedish Fish.

Fish of the Trip: Rainbow Trout circa 6 lbs. Caught on a fly rod and a hopper.

Brothers Enroute packed up and ready to head back to the trailhead, and civilization.