An ancillary trip during 2010 included Moosman Reservoir, Deer Lake and Green Lake on the Boulder Mountain Range in Southern Utah. This was planned as a short turnaround trip to take advantage of a good weathered Labor Day weekend. Only three individuals of the Brothers Enroute attended this trip, but it was equally fun and a well needed rest for me. The early morning start on Thursday allowed the group to get to the trailhead early. Much wildlife was seen during the truck ride to the trailhead, as well as a group hunting for bear. It boded to be a good trip. At the trailhead the three made all the arrangements and got on the trail as soon as possible. The trailhead’s elevation is approximately 8,760 feet. Ironically, old bear signs were found within the first mile of the trail. After a mile and a half and 720 feet of elevation, the group arrived at Chriss Lake. This shallow lake was teaming with small fish, and the only effective way to catch them seemed to be on a fly. MSRH caught one accidentally during his precast, and due to the small size of the fish, it too came back with the wrist flick. It was rather humorous. 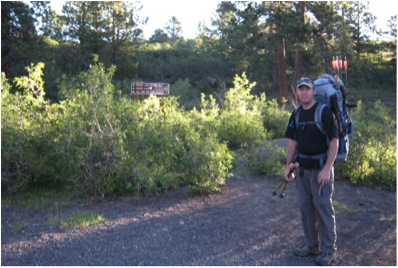 The Professor at the Trailhead to Chriss Lake.

Signs of bear along trail. 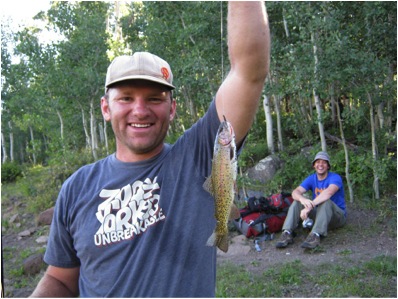 MSRH and I having a chuckle because of a flying fish.

Chriss Lake was only a momentary stop however, and the group continued on to Moosman Reservoir. This was another mile and a half, and another 360 feet of elevation. Camp was set up on the South side of the lake where it looked as if other campers had stationed before. After tents were setup and gear arranged, fishing in Moosman proved successful, but slow. The fish were almost sleepy and nonchalant in their efforts to attack whatever they would normally bite. Their coloring was amazing though, and some of them looked to be midspawn. Due to the shorter trip, the group luckily didn’t have to self sustain by catching fish, so all fish were returned to assure better luck for future fishermen and women. After some time at Moosman the group continued on to Deer Creek Lake with daypacks and had much success in one region of the lake. Catching these fish in that spot almost required a perfect long cast to hit the holes. Once that secret was gained, it proved enjoyable pound and a half fish on a regular basis.   After fishing til near dark at Deer Creek, the group returned to Moosman for dinner and bed. Upgrades in gear for backpacking equipment had been attained before this season, and the group was relatively excited to test it out in rather cooler temperatures afforded by the early September weather.  The Professor and I are keen on gear from Big Agnes and were using their sleeping bags and pads. I had also picked up a small light one man tent for better packing.  After dinner and some enjoyable conversation, the group tested their new equipment for the night. The next morning the normally bland oatmeal was aided by a time intensive harvest of some wild raspberries found on the South side of Moosman.

Spawning Brook Trout at Moosman caught on maribou jig by The Professor.

After breakfast the group donned daypacks again and hiked to Green Lake just past Deer Creek Lake. This is a picturesque mountainside lake that was seemingly deep and teeming with picky cutthroat trout. It seemed that one attempt was allowed per fish, and then it didn’t matter what was thrown their way. The Professor as usual had more success than the others. MSRH decided to put some excitement into the situation and tried to get rid of his headache with a mid-afternoon swim. The water was a balmy temperature near 40 degrees. Triathlon training had improved his form.   After lunch and more fishing, the group headed back to Deer Creek Lake for some fishing. In midafternoon the group noticed Elk wallowing on the East side of the lake. A trip around the lake ensued and the wallows were found fresh with scent and other signs. By this time, night was closing in, and camp was calling. A stop at a spring for water filtering purposes was made followed by dinner and bed. The hike out the next morning was quick and enjoyable. One scenic area provided an awesome photo opportunity due to the clear skies and cooler temperatures. This short trip afforded respite from the hectic work schedule, and an opportunity to test new gear before the upcoming week long trip the next summer.

MSRH during his shrinkage training swim in Green Lake.

The Professor with a cutthroat trout at Green Lake.

Elk wallow along the East side of Deer Creek Lake. 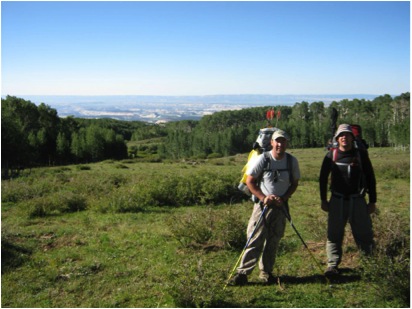